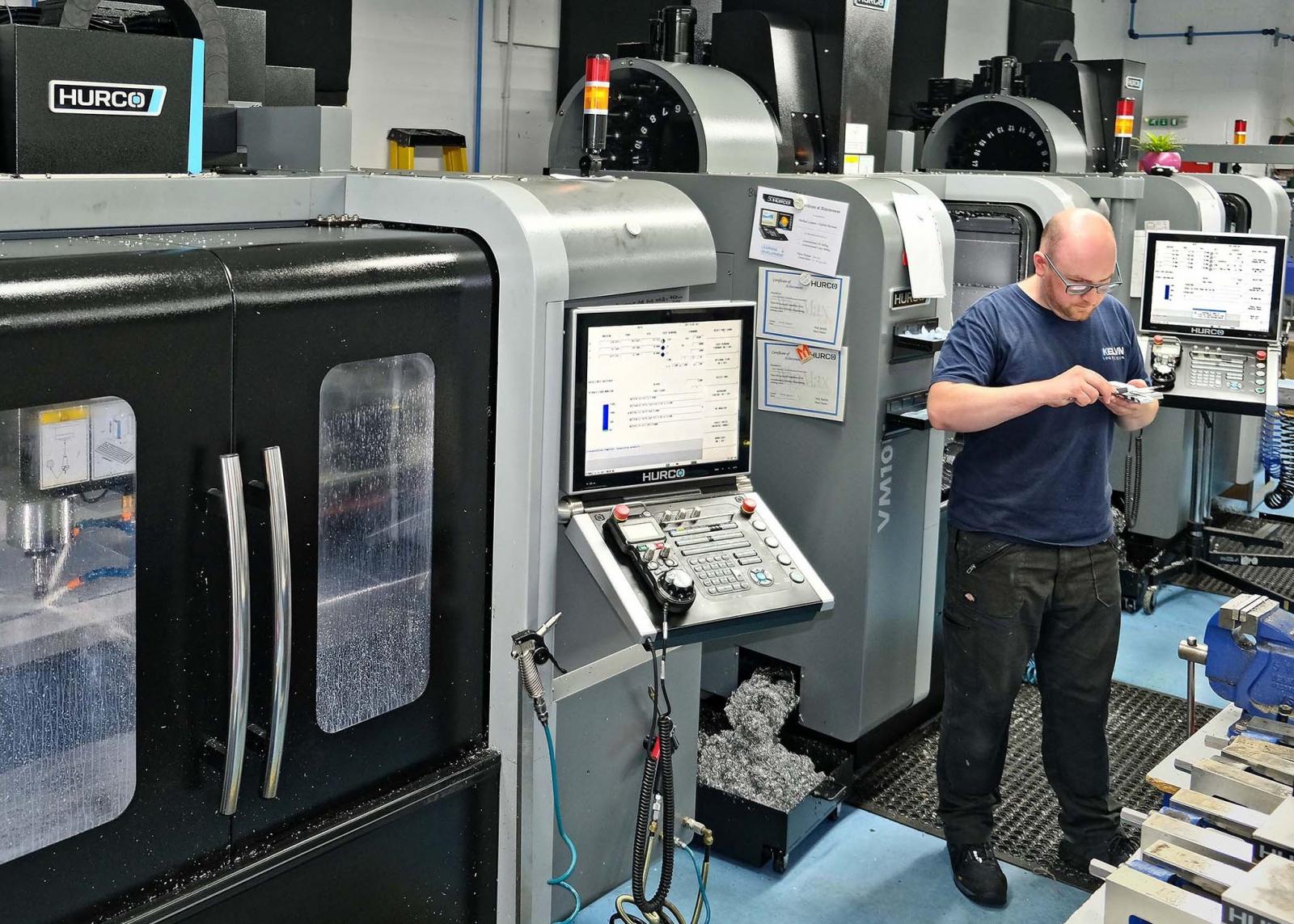 Regular investment in vertical machining centres – bringing the total to six – has coincided with sustained improvement in the level of business at subcontract machining firm Kelvin Precision Products.

Kelvin installed one Hurco vertical machining centre (VMC) per year between 2013 and 2017, plus the addition of a sixth in May 2021, partly to take advantage of the UK government's 130% capital allowance, have coincided with a

Disregarding the first year, when the start-up firm's income was relatively low and therefore unrepresentative, turnover has increased fivefold compared with the second year of trading.

Like many employees working at subcontracting firms, James Staniford dreamt of branching out on his own. After an eight-year stint at a company in nearby Horsham, he took the plunge in 2013 and started Kelvin Precision Products with Claire McGrath, now the Business Director, who invested capital and owned a suitable 4,000 sq ft unit within the Kelvin Business Centre in Crawley.

The enterprise had the help of James’ friend and mentor Alan Lamberth, who used his turning experience to help out at evenings and weekends. It boosted this side of the business at the time and allowed Kelvin to take on much more complex manual turning than would otherwise have been possible.

However it was prismatic machining that quickly took precedence and it now accounts for around 85% of turnover. An online auction on eBay secured the first contract to machine a range of small laboratory components from acetal and aluminium for a customer in the scientific industry, which was also a start-up. Soon afterwards a manufacturer of broadcasting equipment, another new company, discovered Kelvin via its website and placed an order for a range of milled components. Both companies are still regular customers, along with about a dozen others.

The contracts were fulfilled on a Hurco VM10 3-axis VMC, which was purchased new along with a manual lathe, a knee-type mill and a linisher when James started the business. A Hurco machine was chosen for the first major purchase due to the Windows-based conversational programming capability in the machine's WinMax control.

James said, "At the outset we didn't have a CAM system, so relied on WinMax and its menu-driven 3D graphics interface to prepare cycles for machining our customers' components, some of which were quite complex.

"At that time, the other shortlisted machine had a G-code control and 2D graphics, so we regarded the Hurco offering as superior.

"As time went on and parts became even more complicated, we invested in Autodesk FeatureCAM Ultimate CAD/CAM software, but WinMax is quicker for programming simple components and we still use it about one-third of the time."

Following the success of the first VMC, one year later another 3-axis machine was installed – a VM10i with more advanced control technology and diagnostics. Then the first 5-axis machine arrived, a VM10Ui, followed by a second in 2016. A larger VM20i 3-axis VMC with a 1,168 x 508 mm table was delivered a year later and then a third 5-axis VM10Ui in early 2021. Interspersed among these purchases were a sliding-head lathe in 2014 and a fixed-head lathe in 2018.

Having half of its prismatic metalcutting capacity able to produce components efficiently in fewer set-ups using three- plus two-axis cycles, with the rotary axes positioned and clamped, sets Kelvin apart from many of its competitors of similar size. It enables high quality work typically to tolerances of ± 0.05 mm to 0.10 mm to be turned around in short time scales. Normally, components are put on a 5-axis machine at Crawley for Op 1 and a 3-axis machine for Op 2 if it is relatively simple. Fully interpolative 5-axis milling and drilling on the Hurcos is available if suitable jobs come along.

Based close to Gatwick airport, the subcontractor offers machining services with delivery to the south-east of England and to the rest of the UK and Europe via a mail order service, with customers emailing a drawing or CAD file. A regular part of the company's activity is working for other contract machining firms that require more capacity to get an important job out on time.

Today, prismatic machining of a wide range of plastics and metals including stainless steel, mild steel, cast iron, aluminium, brass and copper are the mainstay of the company's day-to-day work, some parts being over one metre in length. Sliding-and fixed-head turn-milling of components from 1 mm to 350 mm in diameter accounts for around 15% of turnover.

A variety of different industries such as medical, pharmaceutical, oil and gas, filtration, broadcasting and automotive use Kelvin's design, prototyping and engineering services. James and Claire plan to expand into an adjacent unit in Kelvin Business Centre to enable the subcontractor's impressive growth to continue.