Net Zero and the foundry industry. 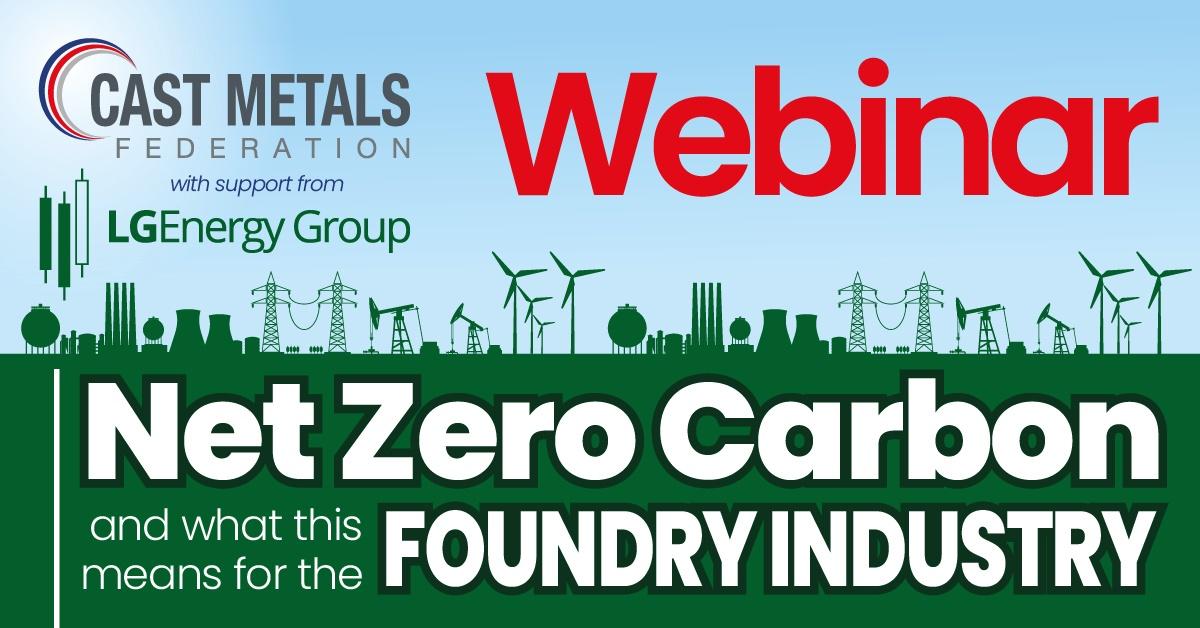 A webinar hosted by the Cast Metals Federation (CMF), alongside its strategic energy partners LG Energy, addressed a range of topics relevant to the UK foundry and castings industry.

With all sectors of the industry represented and both large and small businesses, covering a range of metals all processes joining the session, it was clear that this was recognised as a very important topic for the industry.

Pam Murrell FICME, CMF CEO, began by speaking about the background to Net Zero Carbon, starting with the publication, late in 2020, of the Government White Paper “Powering our Net Zero Future” with its stated aim to “create a sustainable future for UK manufacturing industry through improved energy efficiency and the adoption of clean energy technologies.”  Pam explained how the Transforming Foundation Industries Challenge, which includes metals, alongside ceramics, bulk chemicals, glass, paper and cement, is now seeking projects to improve competitiveness across the foundation industries that are so vital and strategically significant to the UK’s manufacturing supply chains.  She noted that the industry will face some significant challenges, such as the possible move away from fossil based fuels, but there will be opportunities for Members, working alongside the CMF to actively engage in projects and pushing for relevant support for the sector.

The wider environmental framework was provided by Richard Heath Prof MICME, CMF Health, Safety & Environment Officer, who spoke about the BREF process at the use of Best Available Technologies (BAT).  He noted that BAT is not new as a concept, but may be new to many companies who have not engaged with the legislative processes before.  Used across Europe, where it is applied through the Integrated Pollution Prevention and Control Directive under the Industrial Emissions Directive, in the UK the BAT for foundries tends to be mandated most significantly for those sites coming under Parts A or A2.  As the UK Government’s focus on Net Zero intensifies, BREF’s may start to focus on how businesses can adapt to use existing, but more efficient and less energy intensive, technologies even where these are not fully recognised as BAT.  This could include more efficient furnaces and revised moulding techniques.  Horizon scanning suggests that the industry might see BAT being increasingly imposed on smaller Parts B & C sites.

Richard White, Consultancy Strategy Manager at LG Energy, then discussed how the Paris Agreement in 2016 set a long-term temperature goal of ‘keeping the increase in global average temperature to well below 2 °C above pre-industrial levels, and to pursue efforts to limit the increase to 1.5 °C, recognising that this would substantially reduce the risks and impacts of climate change.’

He spoke about how businesses can start to look at their own pathway to net zero, using energy audits as a first step, and in the context of strategic investment to offset and use on-site renewable, whilst making reference to the supply chain pressures that are influencing the drive to net zero, with government legislation and the cost of carbon being used as levers to drive improvements.

Pam Murrell said “With the government now stating that ‘carbon emissions will be cut by 78% by 2035 - almost 15 years earlier than previously planned’ then low carbon investment will need to scale up significantly.  All sectors will be affected and our businesses will need to be enabled to invest appropriately in the coming months and years.”

For more information about how your business can engage with the TFI and Net Zero Carbon challenge for the UK Foundry industry, please get in touch with one of the CMF team.